Colombian firm Interbolsa is being liquidated in a move to protect the interests of Colombia’s financial markets. This after an announcement last Thursday that Interbolsa is facing liquidity shortages. Regulators intervened the following day when the brokerage firm failed to make a $11 million payment to a local bank, according to Reuters.

Of note here is Interbolsa’s list of principal funders (see chart below). Topping the list is Mansarovar Energy Colombia Ltd., a company formed in a unique union of Chinese (Sinopec) and Indian (ONGC Videsh) financing, and which represents 24 percent of activity in Colombia’s heavy crude sector. According to the chart below, Mansarovar holds an 11.61 percent stake in Interbolsa. 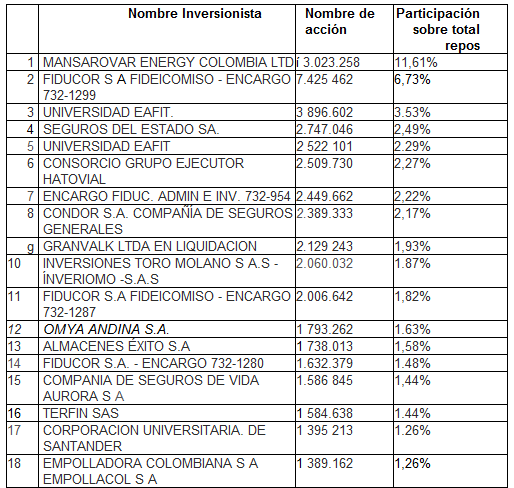 Research firm Hydrocarbons Colombia calculates that Mansorovar’s holdings have an approximate book value of US$7.5 million, but that this amount is not material to either parent company, meaning little in the way of operating consequences for Mansorovar. Nor, they suggest, will there be much pressure in Chinese or Indian home markets to explain the company’s actions.

Though bound to lose millions in the Interbolsa fallout, Monsorovar is a growing presence in Colombia. The company received approval from local partner Ecopetrol in April 2012 for the commercialization of the UnderRiver II field in the Magdalena Medio. This field is expected to allow Mansarovar produce 40,000 bpd in the second half of 2012, which will amount to an increase of 10 percent in total production.

China’s engagement with Colombia, though now expanding considerably, is still a fairly new phenomenon. China’s entrepreneurial presence in Colombia is just now taking shape, with only 40 Chinese companies currently based in Colombia. Among these are giants Sinopec (Mansarovar's parent company), Sinochem, Huawei and Sinohyrdro.

As Latin America’s fourth largest economy, Colombia boasts a high investment grade, macroeconomic stability, private property protection mechanisms, and strong institutions, but China still invests strikingly little in the Colombian economy – only $32 million over the past ten years. To encourage additional investment on the part of Chinese entities, Colombia initiated a bilateral investment treaty (BIT) with China in 2008, which took effect in July of 2012.

A series of MOU’s signed in May of 2012 by Chinese President Hu Jintao and Colombian President Juan Manuel Santos (see PPT slide below) established a framework for future engagement and cooperation between China and Colombia. Highlights from Santos’s trip to Beijing include a pipeline project that will carry Venezuelan, Colombian, and possibly even Ecuadorian crude to Colombia’s Pacific coast, Sinohydro-supported Magdalena river development, and a feasibility study for a China-Colombia free trade agreement. 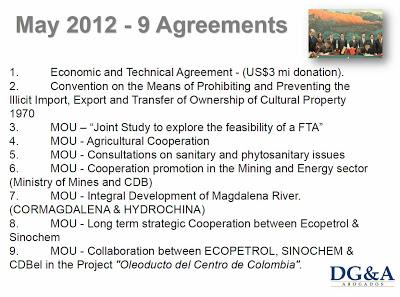 美国重要智库“美洲对话”中国与拉美项目的主任。获弗吉尼亚大学外交事务学士学位，在乔治·华盛顿大学攻读研究生。目前正于美国约翰霍普金斯大学-南京大学中美文化研究中心研究中美关系。进入“美洲对话”前，曾任美国政府的分析师，出访拉美和亚洲；此前任佛吉尼亚公立学校的西班牙语和中文教师。 Margaret Myers is director of the China and Latin America program at the Inter-American Dialogue. She received a bachelor’s degree in Foreign Affairs from the University of Virginia and conducted her graduate work at The George Washington University. She recently studied US-China relations at the Johns Hopkins University – Nanjing University Center for Chinese-American Studies. Prior to arriving at the Dialogue, she worked as an analyst for the US government, which required her to travel throughout Latin America and East Asia. She also previously served as a Spanish and Chinese teacher for Virginia Public Schools.

Will There Be Any Surprises for Sino-Latin Energy Ties in 2013?